Ted Sobel's Touching Greatness is a personal lifetime scrapbook of stories of an improbable life of rubbing elbows with over 750 Hall of Famers in sports, music, and show biz (and even a few U.S. Presidents) that will appeal to all ages and anyone who enjoys a read that will inspire, entertain, and make them laugh out loud. No local reporter has attended and/or covered more world class events with the legends of their genre, including the entire careers of Kobe Bryant, Tiger Woods, Aaron Rodgers, Wayne Gretzky, and so many others—with stories of them all, while covering dozens of Super Bowls, World Series, NBA & NHL Finals series, College Football and Basketball National Championship games, Golf and Tennis majors (including abroad at British Opens and Wimbledon), horse racing's Triple Crown, et al.

A multi-Golden Mike Award winning Southern California-based sportscaster/reporter, Sobel has covered, seen, and experienced a lot through his decades as a radio broadcast legend on several of L.A.'s most historic stations, KFWB, KNX, and KMPC. Currently with the Sports USA network, Sobel was extremely fortunate to have been raised in an era and city of broadcast greats, including Vin Scully, Chick Hearn, Dick Enberg, and legendary L.A. DJ Dave (The Hullabalooer) Hull among others, as well as befriend or work with them all.

While sports was his beat, this native Angeleno has experienced it all and has chronicled that history in the pages of this compelling tome—from growing up in the 60s in Culver City, California (the real 'Heart of Screenland' and a number of the TV classics), interacting with the 'Rat Pack' in old Vegas, to then being around the great music era when the Sunset Strip was the place to hang with the sounds of Laurel Canyon in the air. Those stories include personal interactions with the Doors, the Eagles, the Beach Boys, the Turtles, and some group called the Beatles. In addition, Ted is the nephew of Oscar winning screenwriter/producer Carl Foreman.

Ted will also take you back to his early L.A. days with a retro Triple Crown menu featuring pop-culture, screen gems, and memorable cuisine that will get your taste buds craving for an edible time capsule. Ever enjoy Chasen's world famous chili, a warm fresh donut from Helms Bakery, or taste an amazing scoop of Wil Wright's ice cream that even Marilyn Monroe couldn't pass up? It's all there for your deja vu dining pleasures.

Who do you know who went on personal searches to meet boyhood idols in sports and music and then actually lived a life around them personally and professionally? Hall of Famers Elgin Baylor, Don Drysdale, and Bart Starr are just a few in their own can't-miss stories that any kid could ever dream of. And even the legendary Babe Ruth gets his own mention for playing in front of a young Yankee Stadium snack food vendor named Bernie Sobel, Ted's influential father.

Add numerous other icons like John Wooden, Jerry West, Bill Russell, Shaquille O'Neal, Phil Jackson, Sandy Koufax, Joe DiMaggio, Ted Williams, Roberto Clemente, Gordie Howe, and Mario Lemieux and you're sure to enjoy a rare journey into insightful stories of a life that most individuals could only imagine—giving every reader a front row seat to being their own witness to touching greatness.

What others are saying: 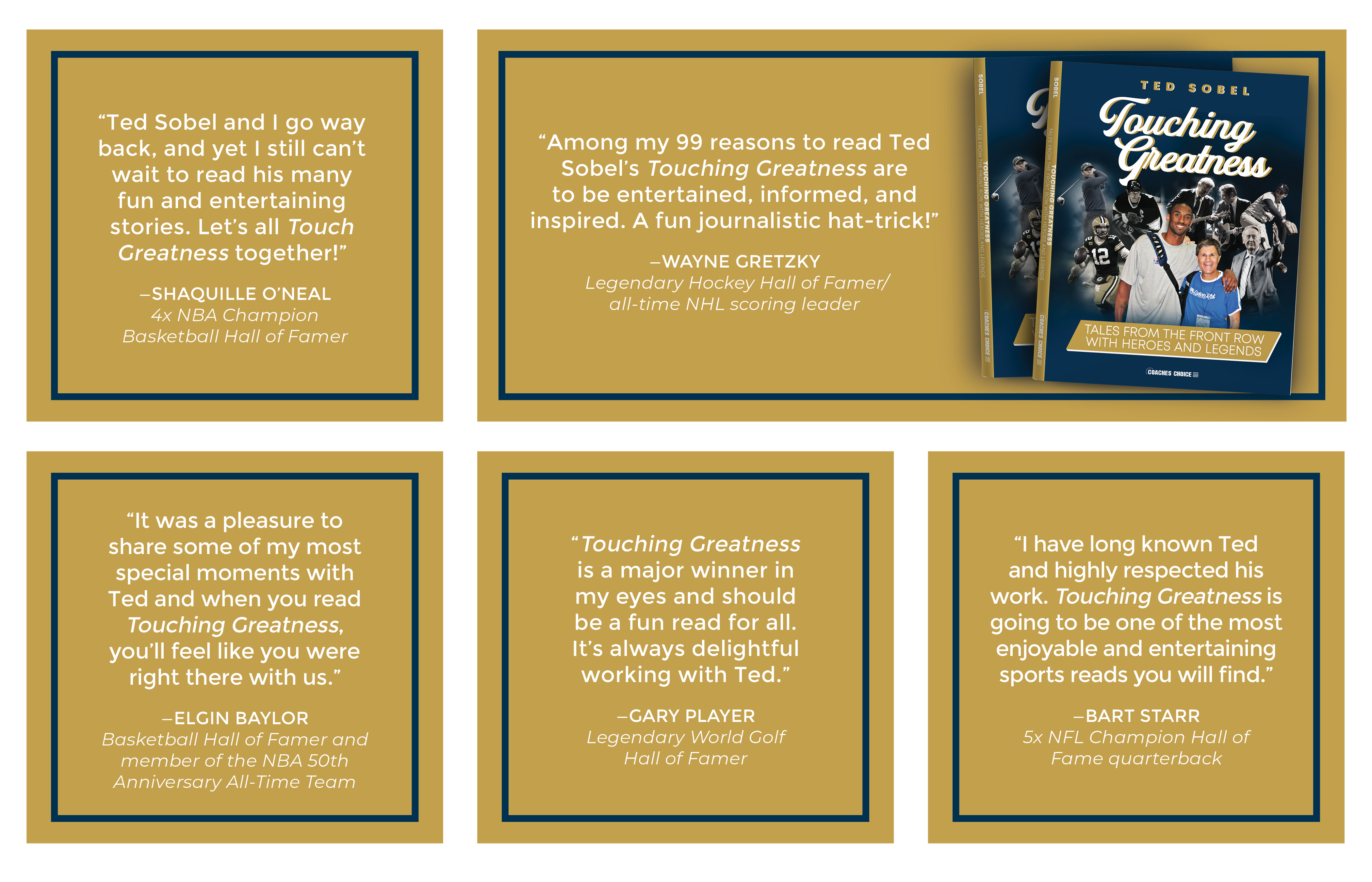 The Winning Combination: 21 Keys to Coaching and Leadership Greatness

In the Presence of Greatness: My Fifty-Two Years in Football

Inside the Pocket: An In Depth Analysis of the Xs & Os

Win The Day: The Ultimate Coach's Guide to Build and Sustain a Championship Culture

Evaluating An Opponent Through Film Study